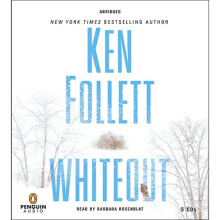 Whiteout [Audio CD]
暂无报价
1评论 100%好评
编辑推荐:
内容简介:“An adrenaline-pumping thriller”(Associated Press) from the #1 New York Times bestselling author—first time in trade paperback. A missing canister of a deadly virus. A lab technician bleeding from the eyes. Toni Gallo, the security director of a Scottish medical research firm, knows she has problems, but she has no idea of the nightmare to come. As a Christmas Eve blizzard whips out of the north, several people, Toni among them, converge on a remote family house. All have something to gain or lose from the drug developed to fight the virus. As the storm worsens, the emotional sparks—jealousies, distrust, sexual attraction, and rivalries—crackle, with desperate secrets revealed, and hidden traitors and unexpected heroes emerge. Filled with startling twists at every turn, Whiteout rockets Follett into a class by himself.
作者简介:Ken Follett Known around the world for his string of smash-hit spy thrillers touched off by 1978’s Eye of the Needle, Ken Follett’s taut tales -- spiked with more than a dash of sex appeal -- have earned this author (and sometime blues guitarist) a reputation as a master of international intrigue. Biography As a young boy growing up in Cardiff, Wales, Ken Follett's love for all things literary began early on. The son of devoutly religious parents who didn't allow their children to watch television or even listen to the radio, Follett found himself drawn to the library. It soon became his favorite place -- its shelves full of stories providing his escape, and ultimately, his inspiration. Follett's more formal education took place years later at London's University College, where he studied philosophy -- a choice that, as he explains on his official Web site, he believes guided his career as an author. "There is a real connection between philosophy and fiction," Follet explains. "In philosophy you deal with questions like: ‘We're sitting at this table, but is the table real?' A daft question, but in studying philosophy, you need to take that sort of thing seriously and have an off-the-wall imagination. Writing fiction is the same." After graduating in 1970, a journalism class touched off Follett's career as a writer. He started out covering beats for the South Wales Echo, and later wrote a column for London's Evening News. Becoming more and more interested in writing fiction on evenings and weekends, however, Follett soon realized that books were his true business, and in 1974 he went to work for Everest Books, a humble London publishing house. After releasing a few of his own novels to less than thunderous acclaim --including The Shakeout (1975) and Paper Money (1977) -- Follett finally hit it big with 1978's Eye of the Needle. The taut, edgy thriller with more than a dash of sex appeal flew off the shelves, winning the Edgar award and allowing Follett to quit his job and get to work on his next book, Triple. Showing no signs of a sophomore slump, Triple went on to spark a string of bestselling spy thrillers, including The Key to Rebecca (1980), The Man from St. Petersburg (1982), and Lie Down with Lions (1986). 1983's On Wings of Eagles was an interesting departure -- a nonfiction account of how two of Ross Perot's employees were rescued from Iran in 1979. Follett changed direction even more sharply in 1989, surprising fans with The Pillars of the Earth -- a novel set in the Middle Ages many critics considered his crowning achievement. "A novel of majesty and power," said The Chicago Sun-Times of Follett's epic story. "It will hold you, fascinate you, surround you." Follett's next three books were a trio considered to be more suspenseful than thrill-filled -- Night Over Water (1991), A Dangerous Fortune (1993) and A Place Called Freedom (1995), but The Third Twin (1996) and The Hammer of Eden (1998) marked a return to Follett's trademark capers. The wartime novels Code to Zero (2000) and Jackdaws (2001) showcased Follett's "unique ability to tell stories of international conflict and tell them well," according to Larry King in USA Today. Follett "hits the mark again" (Publishers Weekly) with his latest story of international intrigue, Hornet Flight (2002) -- the WWII story of a young couple trying to escape occupied Denmark in a rebuilt Hornet Moth biplane who become unwitting carriers of top-secret information. In a way, Follett's smash-hit success has allowed him to give back to the library of Cardiff, Wales -- by filling its shelves with his own transporting tales. Good To Know Eye of the Needle was made into a major motion picture, and four of Follett's books have been made into television mini-series: The Key to Rebecca, Lie Down with Lions, On Wings of Eagles and The Third Twin -- the rights for which were sold to CBS for the record sum of $1,400,000. A very civic-minded soul, Follett is quite involved in his Hertfordshire community, serving as President of the Dyslexia Institute, Council Member of the National Literacy Trust, Fellow of the Royal Society of Arts, Chair of Governors of the Roebuck Primary School & Nursery, Patron of Stevenage Home-Start, director of the Stevenage Leisure Ltd. and Vice-President of the Stevenage Borough Football club. Hometown: Hertfordshire, England Date of Birth: 六月 5, 1949 Place of Birth: Cardiff, Wales Education: B.A. in Philosophy, University College, London, 1970
目录:
相关商品 How to Catch a Fish简介，目录书摘