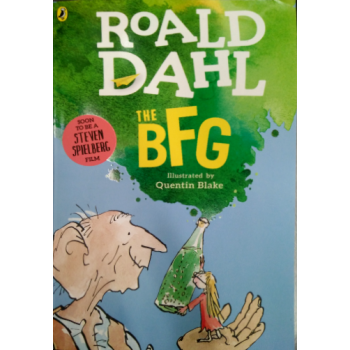 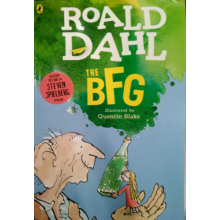 The BFG 好心眼儿巨人 英文原版
暂无报价
1.8万+评论 99%好评
编辑推荐: Review
Evidently not even Roald Dahl could resist the acronym craze of the early eighties. BFG? Bellowing ferret-faced golfer? Backstabbing fairy godmother? Oh, oh ... Big Friendly Giant! This BFG doesn't seem all that F at first as he creeps down a London street, snatches little Sophie out of her bed, and bounds away with her to giant land. And he's not really all that B when compared with his evil, carnivorous brethren, who bully him for being such an oddball runt. After all, he eats only disgusting snozzcumbers, and while the other Gs are snacking on little boys and girls, he's blowing happy dreams in through their windows. What kind of way is that for a G to behave?

The BFG is one of Dahl's most lovable character creations. Whether galloping off with Sophie nestled into the soft skin of his ear to capture dreams as though they were exotic butterflies; speaking his delightful, jumbled, squib-fangled patois; or whizzpopping for the Queen, he leaves an indelible impression of bigheartedness. (Ages 9 to 12)

Review
Dahl's elemental fix on kids' consciousness gets this off to a surefire shivery start, with orphan Sophie, awake st the witching hour, snatched from her bed by a giant hand and carried off to a land of giants clear off the last page of the atlas. But Sophie's kidnapper is really friendly (hence BFG for Big Friendly Giant) and does not eat humans as she had feared, but occupies himself gathering and dispensing dreams. He also expresses himself in a mixed-up, cutesy manner that is simply tiresome. Nearby, however, are nine still-bigger giants who do eat humans ("I is a nice and jumbly giant" but "human beans is like strawbunkles and cream to those giants," says the BFG) - and it's to protect the world from them that Sophie and the BFG hatch a scheme: He will mix a dream from his collection and send it to the Queen of England to apprise her of the threat; then, when she awakens, Sophie will be on her windowsill, and the BFG waiting in the garden, to convince her that the dream is true. And so it is that we find Sophie and the BFG breakfasting with Her Majesty . . . and the BFG violating all decorum, even to letting fly a glumptious whizzpopper (kids would call it a fart). Nevertheless the Queen is impressed and sends off her military men, who, under the BFG's direction, rope the sleeping giants and haul them back by helicopter to be imprisoned in a giant pit. This is all told in Dahl's higgledy-piggledy home-made manner, which is rarely disarming here despite the pandering. And it's hard to find the bumble-tongued BFG endearing. (Kirkus Reviews) --This text refers to an out of print or unavailable edition of this title.

内容简介:“Well, first of all, “ said the BFG, “human beans is not really believing in giants, is they？ Human beans is not thinking we exist.” Sophie discovers that giants not only exist, but that there are a great many of them who like to guzzle and swallomp nice little chiddlers. But not the Big Friendly Giant. He and Sophie cook up an ingenious plot to free the world of troggle-humping —— forever. Performed by Natasha Richardson Annotation Kidsnatched from her orphanage by a BFG (Big Friendly Giant), who spends his life blowing happy dreams to children, Sophie concocts with him a plan to save the world from nine other man-gobbling cannybull giants.

这个童话讲的是一个女孩和一个巨人的故事。巨人国里，一般巨人都长得很高，都有50英尺，只有一个巨人显得很矮，仅仅是25英尺，所以其他巨人从来不认为他是巨人，而叫他“小矮子”。不同的是，50英尺巨人们是要吃人的，吃人的时候就像嚼豆子，他们称人为“人豆子”。 而小矮子巨人却是个不吃人的好心眼儿巨人。他只吃难吃的大鼻子瓜，所以有点发育不良。他会制造梦。当别的巨人每天晚上跑到世界各地吃人的时候，他却悄悄地来到小朋友的窗前，把好梦用小号吹进孩子们的头脑里去。可是小朋友却从来不知道他的存在。直到有一天，一个名叫索菲的小女孩发现了他。他怕被别的巨人发现，就把索菲带回了巨人国，藏在自己的洞里，为了保护索菲，他勇敢地和喝血巨人斗志斗勇。他收藏了几千几万个梦。他带索菲去梦乡捕捉甜美的梦，也把恶梦紧紧的封在瓶子里，以免它们跑到小朋友的头脑里去。索菲差点儿被坏巨人吃掉，是好心眼儿巨人保护了她。他热情又天真，而且很听索菲的话，他还经常把索菲放在他的耳朵里带着她飞。为了阻止其他巨人继续吃人，他和索菲一起为女王配制了一个逼真的梦，成功的说服了女王，并最终制服了巨人。
作者简介: Roald Dahl was born in 1916 in Wales of Norwegian parents. He began writing after a 'monumental bash on the head', sustained as an RAF pilot during WW2. Roald Dahl is one of the most successful and well-known of all children's writers. His books include CHARLIE AND THE CHOCOLATE FACTORY, THE BFG and MATILDA. Roald Dahl died in 1990 at the age of seventy-four.
Roald Dahl (1916-1990) was born in Wales of Norwegian parents. He spent his childhood in England and, at age eighteen, went to work for the Shell Oil Company in Africa. When World War II broke out, he joined the Royal Air Force and became a fighter pilot. At the age of twenty-six he moved to Washington, D.C., and it was there he began to write. His first short story, which recounted his adventures in the war, was bought by The Saturday Evening Post, and so began a long and illustrious career.
After establishing himself as a writer for adults, Roald Dahl began writing children’s stories in 1960 while living in England with his family. His first stories were written as entertainment for his own children, to whom many of his books are dedicated.
Roald Dahl is now considered one of the most beloved storytellers of our time. Although he passed away in 1990, his popularity continues to increase as his fantastic novels, including James and the Giant Peach, Matilda, The BFG, and Charlie and the Chocolate Factory, delight an ever-growing legion of fans.

Quentin Blake is a well-known artist whose work has made him popular on both sides of the Atlantic. He has illustrated most of Roald Dahl’s children’s books as well as many others. He lives in London, where he teaches illustration at the Royal College of Art. The Rescue Princesses: The Moonlit Mystery简介，目录书摘