Knocked Out by My Nunga-Nungas简介，目录书摘 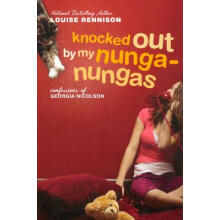 Knocked Out by My Nunga-Nungas
暂无报价
3评论 100%好评
编辑推荐:Readers who became addicted to Georgia's hilarious reflections on adolescence, recorded in journal-like entries, in Angus, Thongs and Full-Frontal Snogging and On the Bright Side, I'm Now the Girlfriend of a Sex God will not be disappointed with this latest installment. The laugh-out-loud events begin when the heroine must leave her Sex God behind to go on holiday with her family in Och-aye land (Scotland), where the teens hang out at a 24-hour supermarket ("Is that the groovy thing to do up there then?" asks SG's brother; "No, it's the only thing to do," the narrator replies). There, Angus befriends a "retired sheepdog," that rounds up "things like chickens, passing cars... old Scottish people doing their haggis shopping." Upon her return, Georgia's reunion with the Sex God occasions an "emergency snogging scale update" (from "1. Holding hands" to "10. The full monty"). Cumulative jokes build on events from the previous novels; some highlights include her "apology" to Mr. Attwood, to whom she "caused injuries" in the last installment, her ongoing "friendship" with P. Green, whom she rescued last term ("Look, P. Green, we can be mates but I'll have to see you in secret because you are a bit dim") and, at the novel's conclusion, a party game of "True. Dare. Kiss or Promise" pairs her up with Dave the Laugh ("a dumpee of mine") for a prolonged snog and inspires renewed confusion. With whom will she end up? Must she choose? Perhaps she can have it (them) all. Teens will identify with Georgia's competing emotions even as they laugh their way through every situation. Ages 13-up.

"Knocked Out By My Nunga-Nungas" is the third in Louise Rennison's "confessions of Georgia Nicolson" series, a sort of teenage Bridget Jones who humorously captures in her diary her life in her British high school, her continuing romance with Robbie, Sex God and member of the Stiff Dylans, the misadventures of her ferocious cat Angus and her deranged little sister Libby, her loonie parents, and the general angst of being a teenager (chest size, fuzzy eyebrows, snoggability, proper application of makeup for specific occasions, etc). This instalment sees Georgia lusting after a former flame, Dave the Laugh, as well as schoolwide lust over the new French teacher Henri. We tag along on Georgia's miserable family vacation to Och Aye Land (Scotland), where the local "club" is the supermarket and Angus and Libby are munching on haggis together. Later, back at school, we follow Gee through her typical days of misbehaviour, pranks, and plotting. Laugh out loud funny, always original, can't wait to read the next one in the series!
内容简介:The saga of fourteen-year-old Georgia Nicolson continues as she travels to Scotland on a nightmarish family vacation, confesses her anxiety over being the girlfriend of a sex god, and tests the limits of true friendship.
作者简介:Author and comedian Louise Rennison grew up in Leeds, England and Wairakei, New Zealand. She took a Performing Arts course in Brighton and eventually created a one-woman autobiographical show, Stevie Wonder Felt My Face, which won awards at the Edinburgh Festival and was made into a television special. As a result of the show's success, she started writing for a London newspaper and was eventually offered a book deal. She is the author of the Confessions of Georgia Nicolson series about the exploits of a teenage girl and her best friends. Her other shows include Bob Marley's Gardener Sold My Friend and Never Eat Anything Bigger Than Your Head.
相关商品 In the Dark [Audio CD]简介，目录书摘