The Septembers of Shiraz: A Novel (P.S.)简介，目录书摘 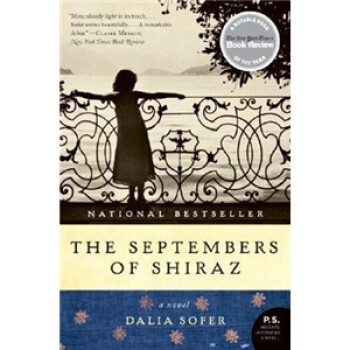 The Septembers of Shiraz: A Novel (P.S.)
暂无报价
7评论 100%好评
编辑推荐:Sofer's family escaped from Iran in 1982 when she was 10, an experience that may explain the intense detail of this unnerving debut. On a September day in 1981, gem trader Isaac Amin is accosted by Revolutionary Guards at his Tehran office and imprisoned for no other crime than being Jewish in a country where Muslim fanaticism is growing daily. Being rich and having had slender ties to the Shah's regime magnify his peril. In anguish over what might be happening to his family, Isaac watches the brutal mutilation and executions of prisoners around him. His wife, Farnaz, struggles to keep from slipping into despair, while his young daughter, Shirin, steals files from the home of a playmate whose father is in charge of the prison that holds her father. Far away in Brooklyn, Isaac's nonreligious son, Parviz, struggles without his family's money and falls for the pious daughter of his Hasidic landlord. Nicely layered, the story shimmers with past secrets and hidden motivations. The dialogue, while stiff, allows the various characters to come through. Sofer's dramatization of just-post-revolutionary Iran captures its small tensions and larger brutalities, which play vividly upon a family that cannot, even if it wishes to, conform.

This is an excellent first novel. Dalia Sofer tells the story of the Amin family, a wealthy Iranian-Jewish family caught up in the ugly repression that followed the overthrow of the shah, in a quiet, dignified style, with detail building upon detail. Jeweler Isaac Amin is snatched from his home and imprisoned by the Revolutionary Guards, for no other reason than the fact that he is affluent and Jewish. His efforts to convince his captors that he is no Israeli spy and end his Kafkaesque tortures and interrogations are described very convincingly.

Particularly notable are Sofer's efforts to portray the ideology of Amin's captors and their sympathizers and to give them a chance to speak for themselves. She does not countenance political murder, religious repression, or anti-semitism, far from it, and her sympathies are with the oppressed; but she does give her villains a voice. Why are some people the masters and some the servants? Was the Iranian upper class complicit in the repression conducted by the shah's goons before his overthrow? These are some of the questions that she asks and these help give the book considerable nuance.

I would have given this book five stars, but the ending failed to satisfy the emotional build-up of the previous 100 pages. The book seemed to peter out rather than to end in a meaningful way.
内容简介:In the aftermath of the Iranian revolution, rare-gem dealer Isaac Amin is arrested, wrongly accused of being a spy. Terrified by his disappearance, his family must reconcile a new world of cruelty and chaos with the collapse of everything they have known. As Isaac navigates the terrors of prison, and his wife feverishly searches for him, his children struggle with the realization that their family may soon be forced to embark on a journey of incalculable danger.
作者简介:Dalia Sofer was born in Iran and fled at the age of ten to the United States with her family. She is the recipient of a Whiting Writers' Award and has been a resident at Yaddo. A graduate of the MFA program at Sarah Lawrence College, she lives in New York City.
相关商品 up at the villa

The Kind Worth Killing A Novel简介，目录书摘