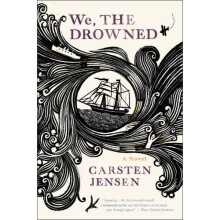 We, the Drowned
暂无报价
3评论 100%好评
编辑推荐:
内容简介:AN INTERNATIONAL BESTSELLER A THRILLING EPIC TALE OF THE SEA "We, the Drowned sets sail beyond the narrow channels of the seafaring genre and approaches Tolstoy in its evocation of war's confusion, its power to stun victors and vanquished alike . . . A gorgeous, unsparing novel." - Washington Post "A generational saga, a swashbuckling sailor's tale, and the account of a small town coming into modernity-both Melville and Steinbeck might have been pleased to read it." - New Republic Hailed in Europe as an instant classic, We, the Drowned is the story of the port town of Marstal, Denmark, whose inhabitants sailed the world from the mid-nineteenth century to the end of the Second World War. The novel tells of ships wrecked and blown up in wars, of places of terror and violence that continue to lure each generation; there are cannibals here, shrunken heads, prophetic dreams, and miraculous survivals. The result is a brilliant seafaring novel, a gripping saga encompassing industrial growth, the years of expansion and exploration, the crucible of the first half of the twentieth century, and most of all, the sea. Called "one of the most exciting authors in Nordic literature" by Henning Mankell, Carsten Jensen has worked as a literary critic and a journalist, reporting from China, Cambodia, Latin America, the Pacific Islands, and Afghanistan. He lives in Copenhagen and Marstal.
作者简介:As a boy in Marstal, Denmark, CARSTEN JENSEN sailed on his father’s boat, a 220-ton freighter named the Abelone. In 2000, he returned to Marstal to write We, the Drowned. He has also worked as a literary critic and a journalist, reporting from China, Cambodia, Latin America, the Pacific Islands, and Afghanistan. We, the Drowned won Denmark’s most important literary prize, while also being selected by readers of a major daily newspaper as the best Danish novel of the last twenty-five years. It was a bestseller throughout Scandinavia and in Germany, and has also been published in the United Kingdom, Spain, and France.
目录:
相关商品