Made in Sheffield: Neil Warnock - My Story简介，目录书摘 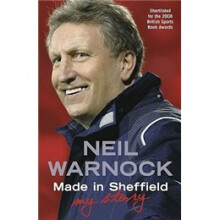 Made in Sheffield: Neil Warnock - My Story
暂无报价
1评论 100%好评
编辑推荐:A man of candour & a wonderful storyteller, brilliant on television interviews
Was the sixth longest-serving manager in league football at Sheffield, and is now in charge of Crystal Palace
Born in Sheffield and was a life long supporter of the Club he came to manage
Lifted Sheffield United to the Premier League
Has lived a life full of colour, controversy and fun
Has an outrageous but hilarious sense of humour
Made 326 appearances in League football for 8 clubs
内容简介:Renowned for his outspoken, colourful character, Neil Warnock here exclusively tells the story of his life in football.

Warnock began his career as a player in 1967, and over the next eleven years played with a number of clubs including Scunthorpe United and Barnsley as a winger. In 1980 he took on his first managerial role with Northern Premier League side Gainsborough Trinity, and has since managed a number of clubs, including Notts County, Oldham Athletic, Bury and, of course, Sheffield United.

Perhaps the Blades' most famous fan, Warnock's relationship with Sheffield United is legendary. Having been appointed in 1999, he became the sixth longest-serving manager in league football. In 2003, Warnock saw United to the semi-finals of the FA Cup and the League Cup as well as the final of the First Division play-off. He cemented his place in the Blades' history books by leading them back to the Premiership in April 2006, after twelve years in the First Division. He finally parted company with Sheffield United in May 2007.

Neil Warnock tells his story with his trademark humour and passion, offering a fascinating insight into the journey of a football manager from the Northern Premier League to the Premier League.
作者简介:Born in 1948, Neil Warnock has enjoyed a long career in football. His eleven year career as a player saw him make 326 appearances for, variously, Chesterfield, Rotherham United, Hartlepool United, Scunthorpe United, Aldershot, Barnsley, York City, and Crewe. He began his managerial career at Burton Albion in 1981 and has since managed Gainsborough Trinity, Scarborough, Notts County, Huddersfield Town, Plymouth Argyle, Oldham Athletic, Bury and Sheffield United. He is now manager of Crystal Palace.
目录:Acknowledgments     ix
Photographic acknowledgments     x
Introduction     1
Childhood     9
First of Many     35
Finding Digs for a Dog     46
Funny Down South     58
Playtime's Over     70
Happy Feet     77
Going for a Burton     91
Up and Away at Scarb
相关商品 Means of Evil and Other Stories简介，目录书摘

A Random History of Football简介，目录书摘