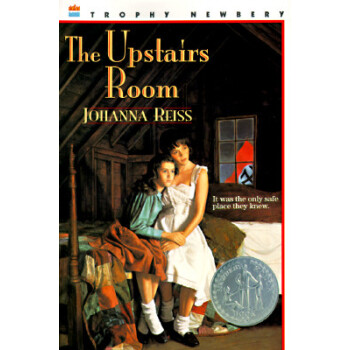 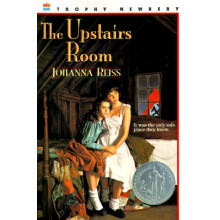 The Upstairs Room[楼上的房间]
暂无报价
30+评论 100%好评
内容简介:When the German army occupied Holland, Annie de Leeuw was eight years old. Because she was Jewish, the occupation put her in grave danger-she knew that to stay alive she would have to hide. Fortunately, a Gentile family, the Oostervelds, offered to help. For two years they hid Annie and her sister, Sini, in the cramped upstairs room of their farmhouse.

Most people thought the war wouldn't last long. But for Annie and Sini -- separated from their family and confined to one tiny room -- the war seemed to go on forever.

In the part of the marketplace where flowers had been sold twice a week-tulips in the spring, roses in the summer-stood German tanks and German soldiers. Annie de Leeuw was eight years old in 1940 when the Germans attacked Holland and marched into the town of Winterswijk where she lived. Annie was ten when, because she was Jewish and in great danger of being cap-tured by the invaders, she and her sister Sini had to leave their father, mother, and older sister Rachel to go into hiding in the upstairs room of a remote farmhouse.

Johanna de Leeuw Reiss has written a remarkably fresh and moving account of her own experiences as a young girl during World War II. Like many adults she was innocent of the German plans for Jews, and she might have gone to a labor camp as scores of families did. "It won't be for long and the Germans have told us we'll be treated well," those families said. "What can happen?" They did not know, and they could not imagine.... But millions of Jews found out.

Mrs. Reiss's picture of the Oosterveld family with whom she lived, and of Annie and Sini, reflects a deep spirit of optimism, a faith in the ingenuity, backbone, and even humor with which ordinary human beings meet extraordinary challenges. In the steady, matter-of-fact, day-by-day courage they all showed lies a profound strength that transcends the horrors of the long and frightening war. Here is a memorable book, one that will be read and reread for years to come.
作者简介:Johanna Reiss was born and brought up in Holland. After she was graduated from college, she taught elementary school for several years before coming to the United States to live. Her first book for children, The Upstairs Room, was a Newbery Honor Book, an American Library Association Notable Children's Book, and a Jane Addams Peace Association Honor Book, and it won the Jewish Book Council Juvenile Book Award and the Buxtehuder Bulle, a prestigious German children's book award. Mrs. Reiss writes that soon after she had finished Tie Upstairs Room, she found "there was still something I wanted to say, something that was as meaningful to me as the story I had told in the first book, the story of a war. `The fighting has stopped'; `Peace treaty signed,' newspapers announce at the conclusion of every war. From a political point of view, the war is over, but in another sense it has not really ended. People are fragile. They are strong, too, but wars leave emotional scars that take a long time to heal, generations perhaps. I know this to be true of myself, and of others. And out of those feelings came The Journey Back, a story of the aftermath of the Second World War." Though Mrs. Reiss lives with her daughters in New York City, they make frequent visits to Holland to visit Mrs. Reiss's sisters, Rachel and Sini, and Johan and Dientje Oosterveld.
相关商品 The Year My Sister Got Lucky简介，目录书摘

Death is Not an Option: Stories简介，目录书摘