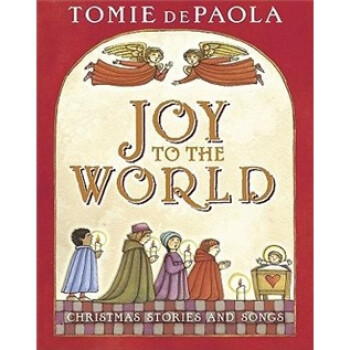 Joy to the World: Tomie's Christmas Stories
暂无报价
1评论 100%好评
内容简介:For generations of his fans, Christmas has been synonymous with Tomie dePaola-after all, it's his favorite holiday! Now, readers will find three of his best-known and beloved Christmas stories together in one handsome volume. Comprised of The Night of Las Posadas, The Story of the Three Wise Kings, and The Legend of the Poinsettia, along with several exquisitely illus trated Christmas carols, Tomie dePaola's. Christmas treasury will become an elegant addition to every family's holiday celebrations.
作者简介:Tomie dePaola Best known for his award-winning picture book Strega Nona and for the 26 Fairmount Avenue series of chapter books, Tomie dePaola is one of the most prolific -- and beloved -- author/illustrators in the field of children's literature. Biography Born in 1934 into a large extended Irish/Italian family, Tomie dePaola received his art education at Brooklyn's Pratt Institute and the California College of Arts & Crafts. Although he always wanted to create children's books, he spent several years applying his talents to the fields of education, theater, and graphic design. In the mid-1960s, he received his first commission to illustrate a children's science book. A year later, he published his first original picture book, The Wonderful Dragon of Timlin. Today, he is one of the most prolific -- and beloved -- author/illustrators in children's literature. In addition to illustrating stories by other writers, DePaola has created artwork for collections of poetry, nursery rhymes, holiday traditions, and folk and religious tales. But, he is most famous for books of his own creation, especially Strega Nona ("Grandma Witch"), the beloved story of an old woman who uses her magical powers to help the people of her small Italian village. Written in 1975, this Caldecott Honor winner is still delighting children today. DePaola admits that there are strong autobiographical elements in many of his books (Nana Upstairs & Nana Downstairs, The Art Lesson, Stagestruck), but nowhere is this more evident than in 26 Fairmount Avenue, a series of charming chapter books based on his Connecticut childhood. Taking its name from the address of his family home, the series captures the experiences and emotions of a young boy growing up in the late 1930s and early '40s in the shadow of World War II. The first book in the series received a 1999 Newbery Honor Award. DePaola and his work have been recognized with many honors, including the Smithsonian Medal, the Kerlan Award for "singular attainment in children's literature," the Catholic Library Association's Regina Medal, and several awards from the Society of Children's Book Writers and Illustrators. In 1999, the New Hampshire State Council on the Arts bestowed on dePaola the Lotte Jacobi Living Treasure Award for the body of his work. Good To Know Tomie dePaola's name is pronounced Tommy de POW-la. Between college and graduate school, dePaola spent a short time in a Benedictine monastery before determining that religious life was not for him. Using a combination of watercolor, tempera, and acrylic, dePaola's artistic style is best described as folk-traditional. DePaola's favorite painters and strongest artistic influences are Matisse, Giotto, and Ben Shahn. Hometown: Connecticut and New Hampshire Date of Birth: 九月 15, 1935 Place of Birth: Meriden, CT Website: http://www.tomie.com/main.html
相关商品